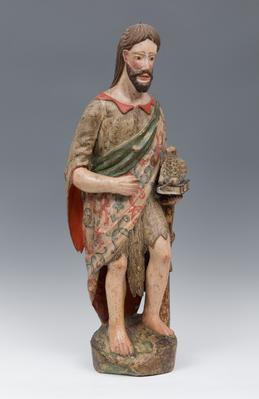 See the image in a new window

Spanish school; 17th century.
"Saint John the Baptist".
Carved and polychromed wood.
The polychromy has some leaps and bounds.
Measurements: 82,5 x 32 x 16 cm.
Hieratic and through sweetened features the author represents in this sculpture of round bulk, the figure of Saint John the Baptist. The body of the saint stands on a pedestal. The saint holds a heavy codex and, above it, the figure of a small lamb, to which John points with an expressive gesture of the right hand. The gesture and the attribute refer to John's salutation to Jesus: "Behold the Lamb of God, who takes away the sin of the world" (John 1:29). The figure has been carved only on the front part, while the back part is completely smooth. It must therefore have originally been part of a larger ensemble, probably an altarpiece.
John the Baptist was the son of the priest Zechariah and Elizabeth, cousin of the Virgin Mary. He retired at a very young age to the Judean desert to lead an ascetic life and preach penance, and recognised in Jesus, who was baptised by him, the Messiah announced by the prophets. A year after Christ's baptism, in the year 29, John was arrested and imprisoned by the tetrarch of Galilee Herod Antipas, whose marriage to Herodias, his niece and sister-in-law, he had dared to censure. Finally St. John was beheaded, and his head given to Salome as a reward for his beautiful dances. This saint appears in Christian art in two different guises: as a child, a playmate of Jesus, and as an adult, an ascetic preacher. The adult Saint John depicted here is dressed in Eastern art in a camel-skin sackcloth, which in the West was replaced by a sheepskin, leaving his arms, legs and part of his torso bare. The red cloak he wears at times, as well as in the scene of his intercession at the Last Judgement, alludes to his martyrdom. In Byzantine art he is depicted as a large-winged angel, with his severed head on a tray which he holds in his hands. However, his attributes in Western art are very different. The most frequent is a lamb, alluding to Jesus Christ, and he often carries a cross of reeds with a phylactery with the inscription "Ecce Agnus Dei".

Presenta saltos en la policromía.
This lot can be seen at the Setdart Madrid Gallery located at C/Velázquez, 7.

REMEMBER that in the last 3 minutes any bid increases
the auction time by 1 minute.

Also in the last 3 minutes, if you wish, you can place
consecutive bids to reach the reserve price.


Miquel Mont
Lot 35245767
MIQUEL MONT (Barcelona, 1963).
Untitled, August 2005.
Acrylic on plywood.
Signed, dated and with annotations by the artist on the back.
With label of the Galería dels ángels on the back.
Measurem...


You are going to bid the amount of €

Setdart sends, weekly and via e-mail, a newsletter with the most important news. If you have not yet requested to receive our newsletter, you can do so by filling in the following form.

SETDART ONLINE SL, as data controller, will treat your data in order to send you our newsletter with commercial news about our services. You can access, rectify and delete your data, as well as exercise other rights by consulting the additional and detailed information on data protection in our privacy policy.

We use our own and third-party cookies for analytical purposes and to show you personalized information based on a profile made from your browsing habits (for example, visited pages). Click here for more information. You can accept cookies and continue browsing or customize them.